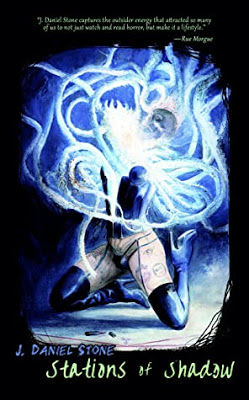 I was gifted a copy of this book in exchange for an honest and fair review.
To find out more about J. Daniel Stone, check out his website www.SolitarySpiral.com
Halfway through this novel, I couldn’t decide whether this book was too brilliant for me to totally understand every nuance, or pretentious AF. The truth is probably somewhere near the middle.
Sebastian and Adrian are two New York drag artists, caught in a never-ending cycle of envy at each other’s art, lust for each other’s bodies, and professional admiration. Sebastian AKA The Hydra, seems to transcend his human form as he blows the audience’s mind night after night, whilst Adrian (drag name Hera Wynn) wants The Hydra’s crown and will do anything to get it.
In their circle of friends are transitioning Lilith, who knows Adrian is dangerous but goes unheard, and lugubrious Phil, hovering in Adrian’s shadow, as well as other colourful, angry, arty satellites. There’s a too-cool-for-school feel about the setting, deep in the underbelly of the New York drag scene. Yes, there are sequins and wigs and bitchy queens, smatterings of phrases which will be familiar to watchers of Ru Paul’s Drag Race, but make no mistake. This is far from glamorous. This is drag in it’s most visceral form. You can practically smell the sweaty feet, the stale cigarette smoke, the gin breath, and hear the trash talk that goes on in cramped backstage dressing rooms, as well as feel the simmering resentment and anxiety to put in a great performance for the baying crowd, waiting with their phones to put the perfect picture on Instagram.
This book requires concentration. There’s a sepulchral feel to it, stripping away the outer skin and revealing the bones and sinew beneath each performer. The way the characters think and feel are so high-brow, it defies the grimy backdrop of the story, yet somehow, that is the beauty of it. Take this tiny snippet.
Repugnance is a cognisant being who would misuse her evanescent time in this world, Lilith thought.
This was a few seconds after Lilith had woken with a “hellacious hangover.” Frankly, I don’t know of anybody who would be capable of such incisive thought processes at such a time, but still. Elsewhere, there were words I had never seen before. A couple, I had to look up. There’s nothing wrong with that. Far from it, but the fit seemed strange, given the subject matter. Strange, bold, and perversely beautiful.
I’m still not sure whether this book is actual supernatural horror, with forces of evil sucking the protagonists into a maelstrom of despair, or an allegory for the mental illness and historical trauma which haunt the characters. Whatever it is, Adrian, under the guise of friendship, makes Sebastian and those around him, doubt his own sanity. This is industrial strength gaslighting, borne out of jealousy for Sebastian’s talent at his craft, and bitterness that Sebastian does not see him as anything other but a fellow artist and occasional lover.
So yes, there’s a lot going on, and the rich, verging on lurid, prose was a distraction at times. If it had been tuned down just a little, I might have learned more about the humming underground queer scene and the challenges people within the community face. I might have picked up the subtleties of the plot, and appreciated more the work that went into crafting this novel. Sometimes less is more, and this book felt as if more was more. And then more after that.
There were also references to bands I had never heard of, television programmes I had never watched and films I had never seen, and this wouldn’t be a problem apart from the comparisons the author makes (‘like that scene from…’) Considering the forensic level of detail in majority of the book, this seemed oddly lazy. Also, there is an incident which happened in public to a drag queen called Crowna Thorns, whilst she was performing on stage, and I still don’t know who did it or why. It felt as if the meaning had been lost. Maybe that’s the point. Everyone is so self-absorbed, they just assume everything is about them.
Lilith’s story was brilliantly observed. Out of all the characters, she seemed the most human, and her story is heartbreaking. She was without doubt my favourite character in the book, as she possessed heart and soul which Sebastian, the MC, seemed to be lacking. Hand on heart, I struggled to root for Sebastian, even though his story and his struggles with mental health were searing. And Adrian was so obnoxious, he was never going to invite any empathy at all.
Finally, although this reviewer struggled in places with this book, other people won’t. I hope they will dive in and have nothing but admiration for the precocious talent of an author who isn’t afraid to push the boundaries. This isn’t a quick read. It requires concentration, but if you can give it your all, you will be rewarded. I fully expect to see this author winning literary prizes in the future, and if they do, they will be fully deserved.

On the surface, New York City is a gentrified play toy for the rich. But underground, the art scene is weirder than ever.

Sebastian Ricciuti, known by night as the Hydra, wants to change the way people think about drag by infecting the scene with a macabre flavor, even if that means exposing the ghosts in his head and finding the way beyond his own flesh. To be the best, a performer must reach into their psyche and pull out the nightmares that lie beneath. What would happen if we tapped into the full potential of our brain? Could it change person’s skin and reveal the monster beneath?

Adrian Zapatero, better known as Hera Wynn, wants to be the sickest drag performer New York City has ever seen. He will stop at nothing until he is the supreme. Bejeweled in glitz, tattooed with lace, and slathered with lipstick the color of shadow, Sebastian and Adrian bring freak culture back to subterranean clubs with storms in their eyes and theatrical violence in their heart.

But at what cost? Desire makes people weak. Envy breeds bitterness. Artists incite their own insecurities. There can only be one Queen of the Night. And she must do whatever it takes to earn that crown, even if it means destroying romance, reputations and friendships. Sycophants can only take so much emotional distress before they implode.

Drag racing in New York City has never been darker.

One thought on “Book review – Stations of Shadow by J. Daniel Stone”