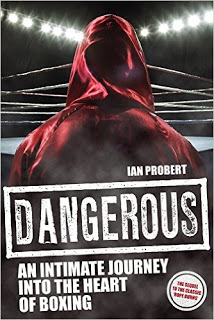 Quite frankly, a book about boxing would not be an automatic go-to read for me, but because I had read Johnny Nothing, Ian Probert’s satire for kids, I was confident that I would enjoy the writing style, if not the subject.
Years before, Michael Watson was critically and permanently injured during a world title fight with Chris Eubank. Traumatised, Probert vowed never to write about boxing again, a decision brought about by shock and guilt that he had been unable to help someone he truly admired and was proud to call his friend.
Now he has returned, with all the wealth of information he has amassed about the colourful characters, triumphs and tragedies of the sport he has always loved. And thank goodness he has, because anyone who loves boxing should have this on their bookshelf.
I wasn’t expecting an incredibly personal, moving and brutal look at a much maligned and misunderstood sport. The sacrifices are obvious, the prizes huge and the downfalls spectacular – anyone who follows sport knows that already – but it is also a sport where people look out for each other. The amount of care, love and support people have for fellow competitors is something other sports could learn from.
Probert is an experienced journalist who isn’t afraid to put his own fallibility on display. As well as a rich seam of stories about well-known figures in the boxing world, there lies his own, sometimes excruciating, experiences as he followed stories, fumbled interviews, allowed his insecurities to get in the way, the smoking and drinking, the poor diet, the overall grubbiness of it all. The book isn’t just about boxing, but about the trials of being a journalist, written in Probert’s modest, inimitable style.
But in the end, the sportsmen take centre stage, and what comes through most strongly is the affection. Posturing aside, this is a close-knit community of people who look out for each other. I’m guessing this would have been a tough book to write, with all the painful memories Probert has, but the world of sports writing has become richer for it. I for one will never watch a boxing match in the same way again.
In one word: Respect.